I’m not really prone to melodrama. But recent events in our world may make it seem like the end is nigh.

As I write this, the UK has voted to leave the EU, and there has been major political upheaval. Just this morning, yet another politician is washing his hands of the consequences by stepping down from one of his roles. There is a sense of anger and worry among ordinary people, as the future looks increasingly uncertain.

Further afield, major bombings rock the world. In the past week, there have been 3 significant bombings reported in the news: Turkey, Bangladesh and Iraq. Untold grief has been caused by people who think they have a right to take the life of their fellow human beings.

History has also been speaking in this past week. The 1st July 2016 marked the 100th anniversary of the beginning of the battle of the Somme: one of the bloodiest battles of the whole First World War. By the time this battle had concluded, there were over 1,000,000 casualties.

All this would be sufficient grounds, I think, to stay indoors, lock your doors and never come out again. The world can be a frightening place, and if we really stop to think about it, it would be a challenge to get up and go into the world each day.

Being a Christian in the current climate brings its own challenges. Our culture, which used to be broadly sympathetic to the Christian faith, is no longer. Indeed, any sort of “faith” based system of belief is coming under increased pressure to stay out of public life.

With all this confusion, uncertainty and pressure, what is it that keeps me going out into the world? It is the the sure hope that I have for the future: something which was brought into sharp focus very recently.

I was recently involved in the Praise Gathering 2016 concerts. As one of the encores, we sang a fairly traditional hymn, put to a new musical setting, called My Jesus, I Love Thee. The setting we used was based on the one by Darlene Zschech:

In this video, she explains a little about the origin of the song, and why she chose to put this to a new setting:

At the Praise Gathering concert, we sang the first three verses of the song, then left a pause while someone closed in prayer. We then sang the fourth verse. During the Sunday concert, and during the closing prayer, I had the words of the fourth verse running through my mind:

In mansions of glory and endless delight,
I’ll ever adore thee in heaven so bright;
I’ll sing with the glittering crown on my brow:
If ever I loved thee, my Jesus, ’tis now.

As we were praying, this third line stood out and I had an incredible realisation: God has a crown for me!

James 1:12 describes this as the “crown of life”. In other words, the crown we receive is the gift of eternal life with God. It is unlikely we will receive a literal crown.

But the picture which came to my mind was of the faithful standing in the New Creation, giving praise and glory to God, each of us wearing the crown we received from God; a crown which represents God’s love and pride in each one of us. I imagine as well the words God will utter will be the same as those said by the King to his servant in Matthew 25:

When the world seems to be falling apart, this is hope drives me forward: 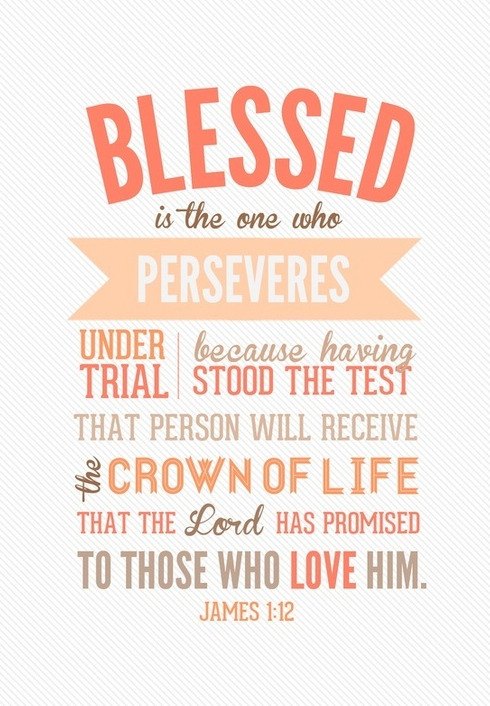 I’ve enjoyed this series of mini-posts, as I had to articulate certain aspects Christianity in as concise a way as possible. This really helped me to reflect on what was really important about my faith, and how to express this in as few words as possible.

My problem with this series was that it felt very disjointed and disconnected: I tended to write about “my next idea” without much consistency between each post. So, I have decided to bring this series to an end. I’ll be starting a new “short” series in a couple of weeks, which I’m hoping will work better. So, watch this space!

In the mean time, I want to leave you with something with which I can wrap up this series. Whenever I’m hard pressed to single out one aspect of the Christian faith, I always come back to one: Hope.

Christianity offers more hope than any other world-view or faith: it tells us we are made by God, so each life has purpose; we have broken our relationship with God because we have rejected Him, but God reached down to us in love; through Jesus Christ’s death, the penalty for our sin is removed, and we are forgiven; and through Jesus’ resurrection we are also promised new life after our deaths.

There is so much more to the hope of Christianity, but this gives you a flavour of the hope you could find, if you believe!

I also hope this series has encouraged/informed/challenged you, and hopefully further series will do too!

But at the end of another year, some are tempted to ask this. Especially given the state of things in the world at the moment.

People tend to worry about the future. There can be an uncertainty: nobody knows what tomorrow will bring. The Christian faith, however, paints an incredibly hopeful picture of the future we can receive when we put our faith in Jesus:

“Then I saw ‘a new heaven and a new earth,’ for the first heaven and the first earth had passed away, and there was no longer any sea. I saw the Holy City, the new Jerusalem, coming down out of heaven from God, prepared as a bride beautifully dressed for her husband. And I heard a loud voice from the throne saying, ‘Look! God’s dwelling-place is now among the people, and he will dwell with them. They will be his people, and God himself will be with them and be their God. “He will wipe every tear from their eyes. There will be no more death”or mourning or crying or pain, for the old order of things has passed away.’” (Revelation 21: 1-4)

This is certainly an image of the future which encourages me and gives me hope at the end of another year.